Highlights of the January Meeting

Last night was treated to a trunk show from one of our own guild members, Jean Gordon. Jean gave an excellent talk on Redwork. She's affectionately known to guild members as the "Queen of Redwork" and here's a picture of Jean as she introduces her husband, who operated her interesting slide show. 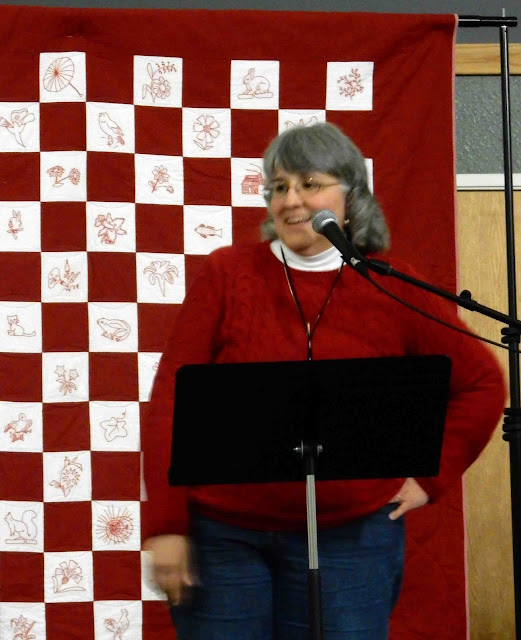 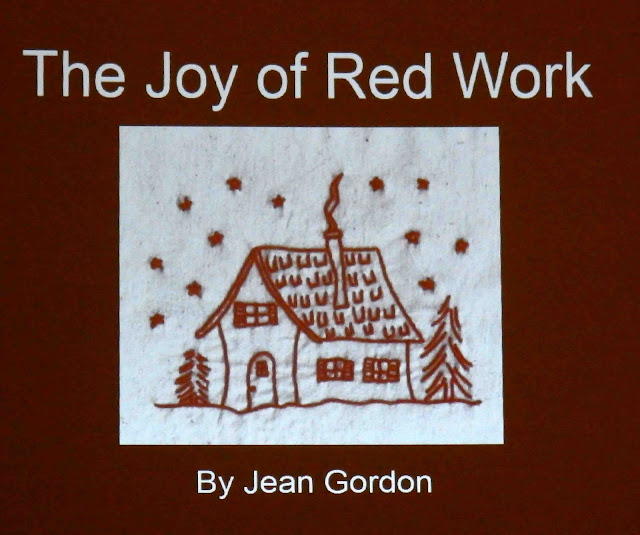 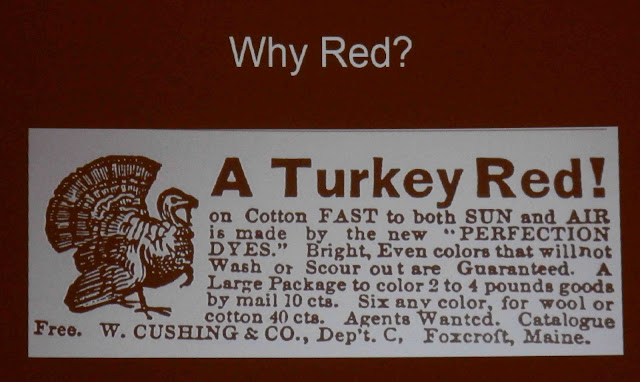 So, why red indeed? As it turns out, redwork came to America from Europe, where it was called "Turkey work". Turkey red was one of the few colorfast colors of the time. This special type of red thread was developed in Turkey more than 200 years ago. Prior to this "Turkish red," thread wasn't colorfast. Colors would bleed in the wash, so colored thread couldn't be used on quilts or garments. With the introduction of a colorfast red thread, quilters and embroiderers could adorn everyday items such as quilts, blankets, dishtowels, and clothing, and the color wouldn't wash away.

But not all redwork is done in red. It can be done in other colors as well. What distinguishes redwork from other forms of embroidery is that it is traditionally done using stem stitch, or outline stitch. 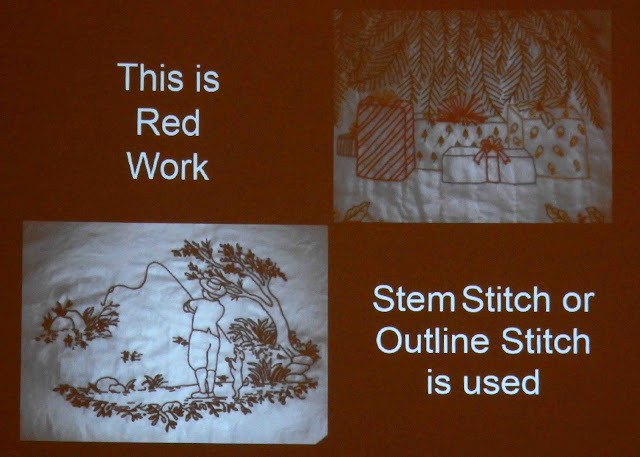 A search online for more about this revealed that by tradition, the main stitch that was used to outline the designs was the Stem Stitch (right, worked with the working-thread to the right of the needle) or Outline stitch (working-thread to the left of the needle). This type of stitching was called the Kensington stitch and was popularized by the Kensington School for Girls in England during the 1880s. Satin Stitch could be used sparingly to fill in small enclosed areas.  Backstitch or the split stitch could be used to cover tight curves and occasionally to outline the designs. Straight Stitch was used to cover small straight lines and French knots were used for eyes, strawberry specks, and any other place where a small dot was needed. Feather Stitch was sometimes used along the seams of pieced quilt blocks. You can read more about redwork by clicking right here.

Jean showed us one of her quilts all stitched in black with black and white fabrics. Despite its black color, it is still considered redwork because of the stitching. Redwork done in black is referred to as "black redwork". 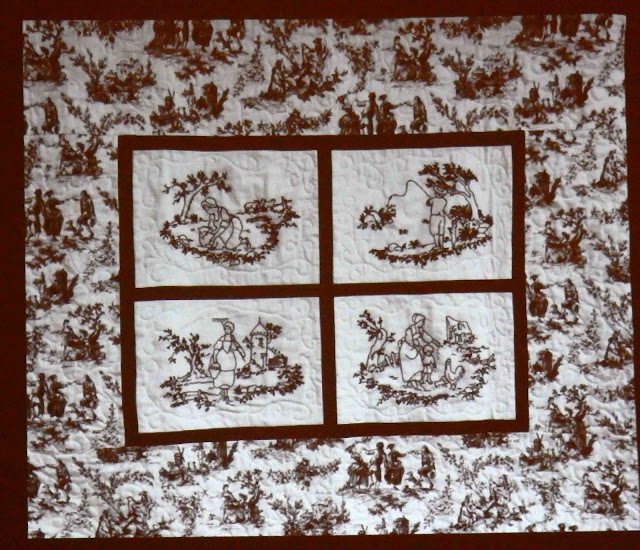 Blackwork is something different altogether. Below is an image of Mary Queen of Scots wearing blackwork designs. 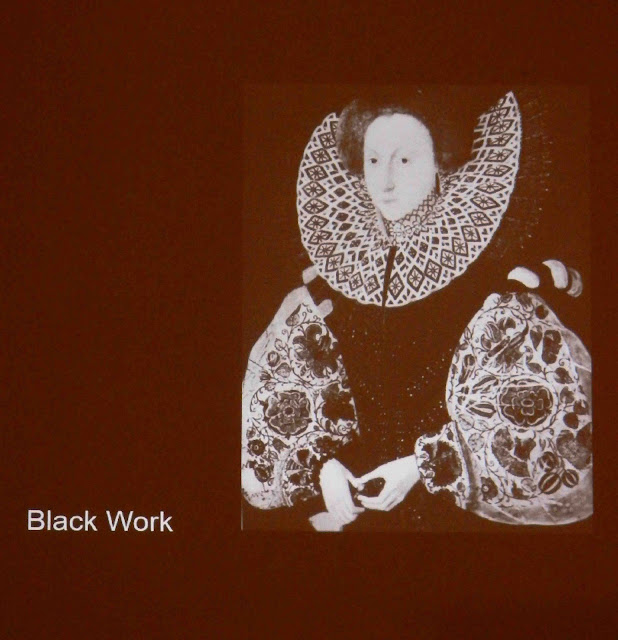 In general, it was reserved for aristocracy and was also known as Spanish blackwork. Here is an example. 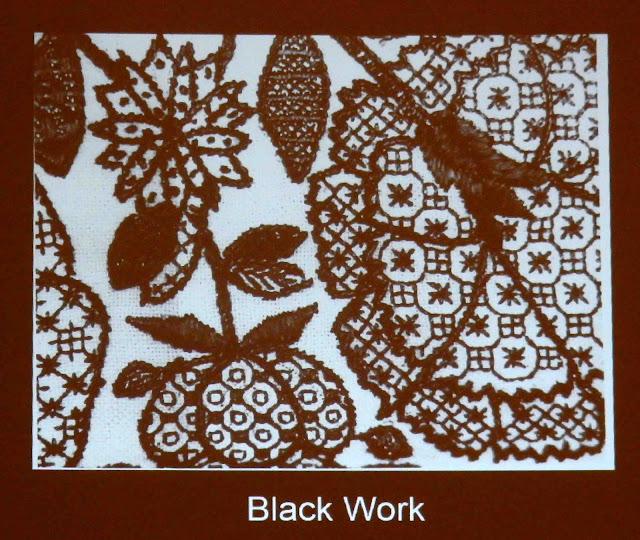 In the earliest blackwork, counted stitches are worked to make a geometric or small floral pattern. Later blackwork features large designs of flowers, fruit, and other patterns connected by curvilinear stems. In the third style of blackwork, the outlined patterns are "shaded" with random stitches called seed stitches. This style of blackwork imitates etchings or woodcuts. If you'd like to learn more about Blackwork, you can find more information by clicking right here.

In her own work, Jean created this wall hanging of the Pledge of Allegiance in which she used blackwork stitching to create the corner stars. 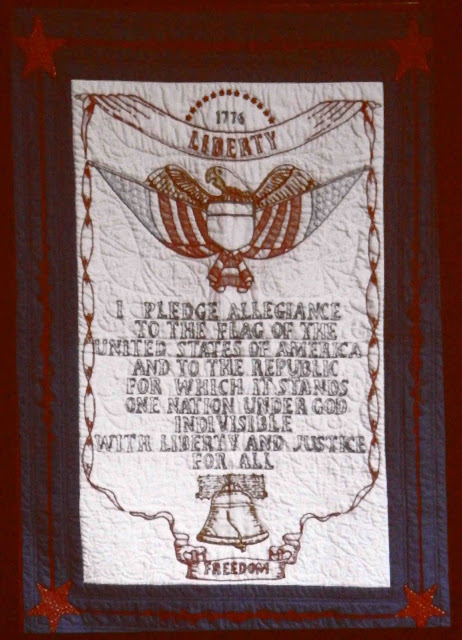 Here's a close-up of Jean's blackwork on this wallhanging. 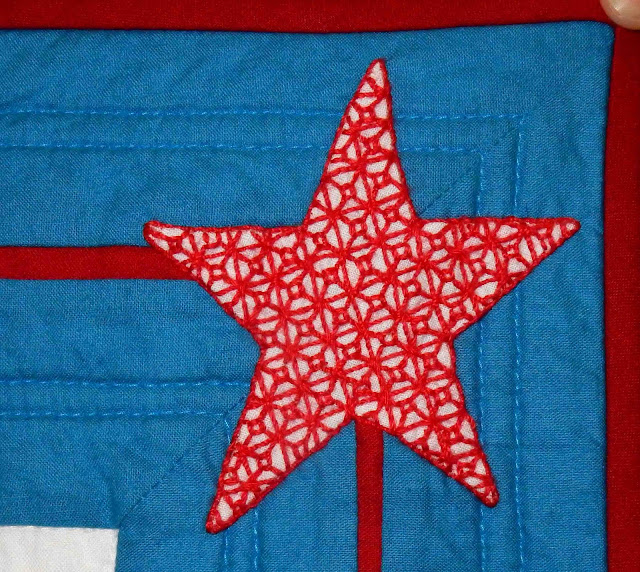 Jean has created some wonderful patterns. Here is her Christmas Tree wall hanging. The ornaments have snaps attached so that it can be treated as an advent calendar, if you so desire. Again, it's done in green and red, but it still conforms to traditional redwork stem stitching. 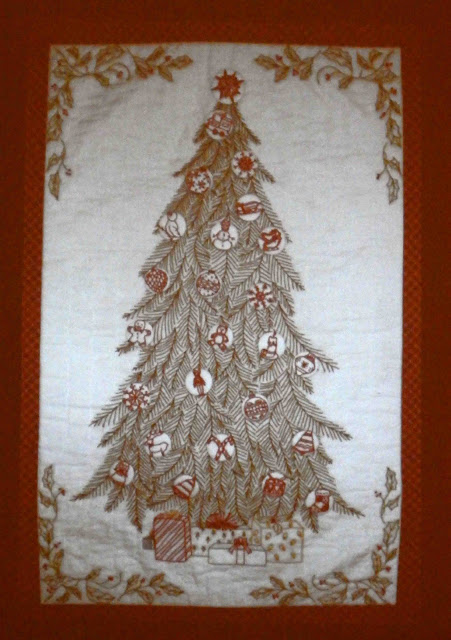 Jean told us she grew up in a small town in a family of 12 children. She created another of her quilts during a difficult time in her life. During this time, she wanted to return to her small town, and so she created this quilt to represent aspects she missed from small-town living. 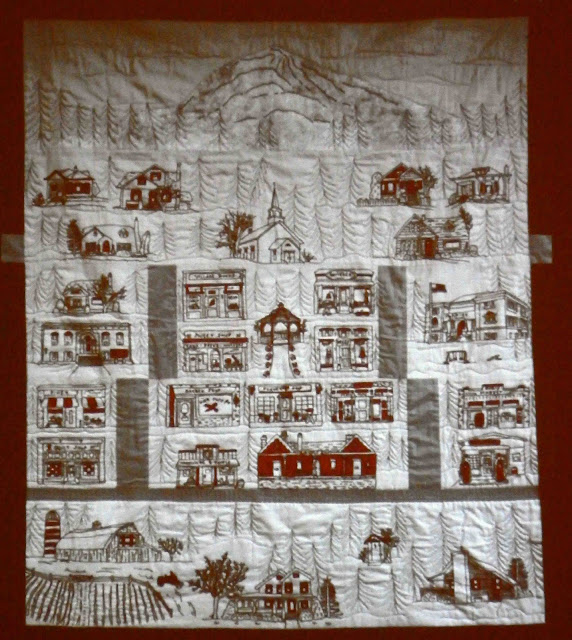 Most of the pictures for this post are taken of slides that were projected onto the wall, but I have a few of the original quilts Jean showed us as a part of her trunk show. The three images below are close-ups from the quilt above. 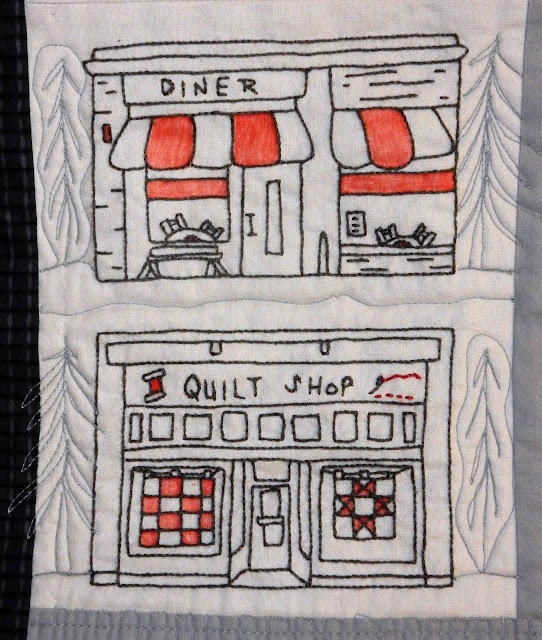 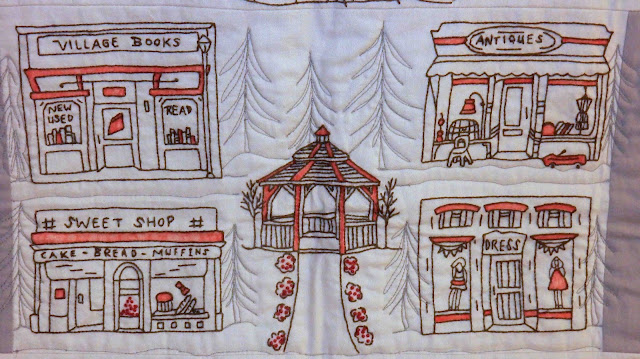 This next quilt is one she made to celebrate fall. 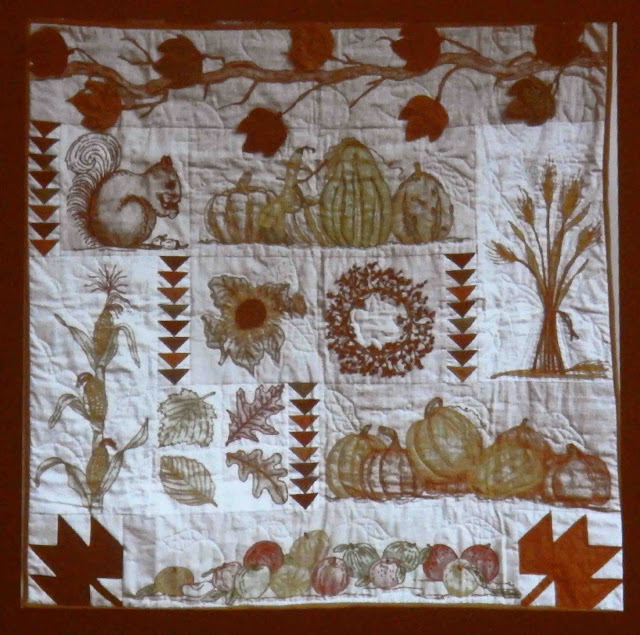 Here are a few close-ups from the original quilt. Look at all those French knots making up the center of the sunflower! 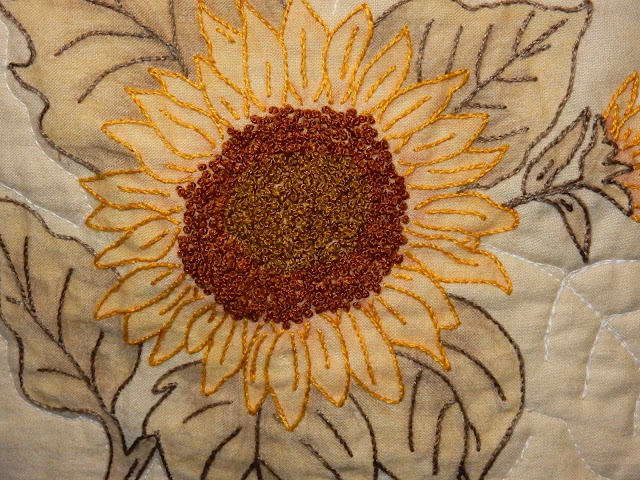 You can see that her simple quilting that accents the beautiful embroidery without competing.

In this next image, she's embellished with seed beads. 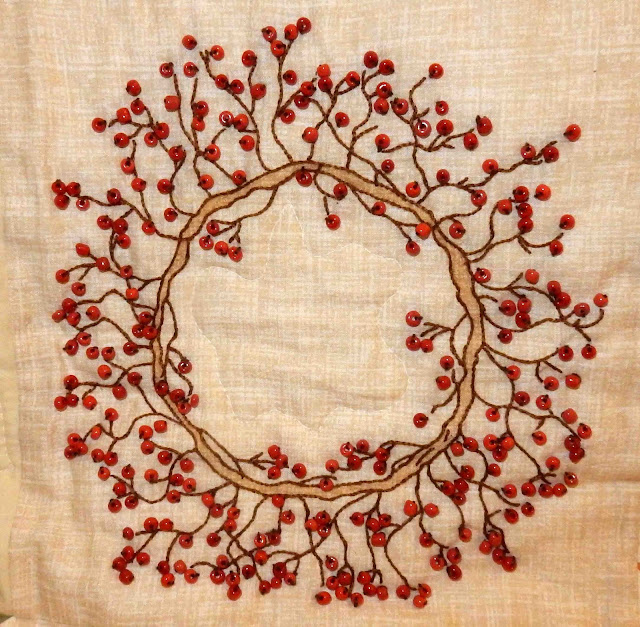 The leaves are three dimensional. 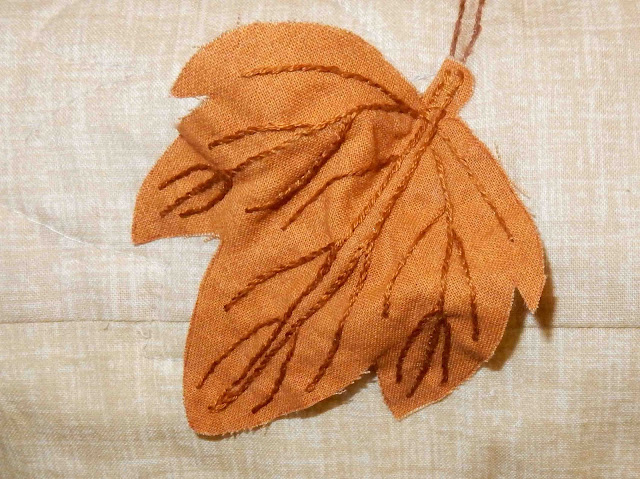 Shading is done with colored pencils. Jean explained that some of the shading in vintage redwork has become stiff and brittle. She is hoping that colored pencils will not have this same troublesome characteristic. 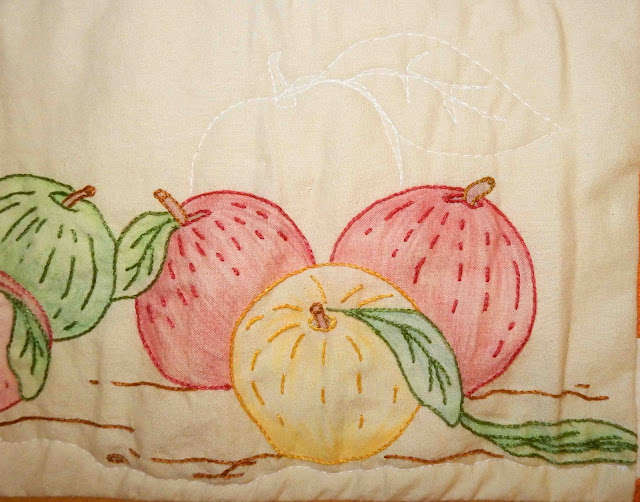 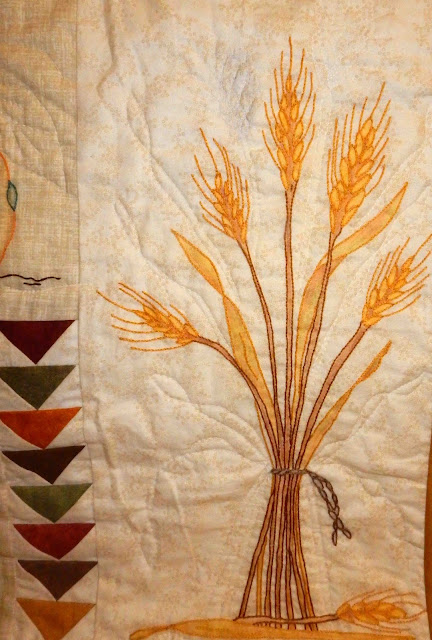 Jean has a "Redwork Club" that meets at one of our local quilt shops, Sharon's Attic, from 6-8 p.m. on the first Thursday of each month. She uses this next piece as a teaching piece, and this is Jean's original design. 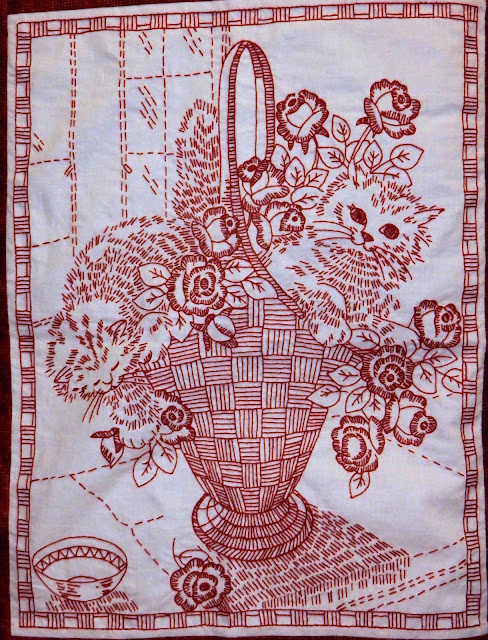 She left it unfinished so that she can teach how to make the back look as pretty as the front. Take a look at the back of this piece: 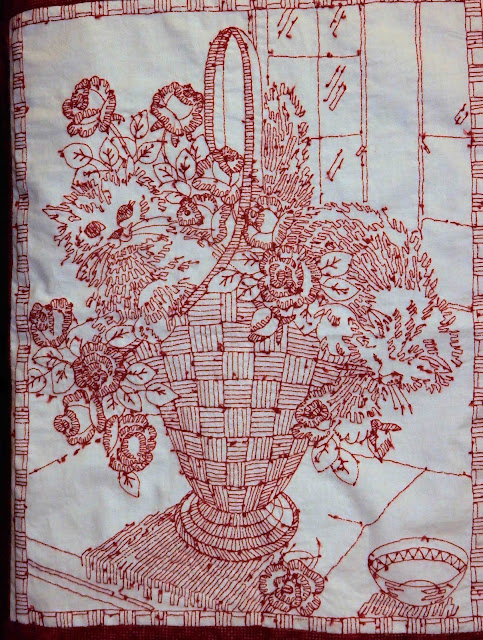 Even getting in very close, it looks amazing! 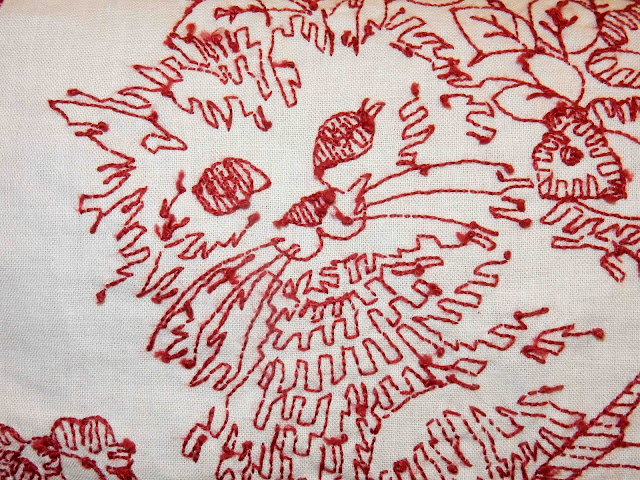 These are some of Jeans quilts that were hung for display. This next one is from six patterns she inherited after the death of a friend. Six of the patterns were from Workbasket magazine. Six designs were missing from the original set, and Jean drew the remaining designs herself. 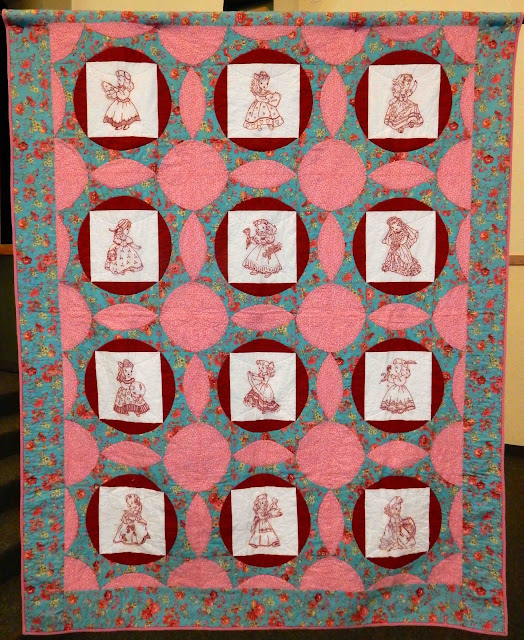 This next one was made from penny squares. Redwork patterns came to the United States sometime before the Civil War. Prior to the war, cotton was plentiful and affordable. General stores sold 6 inch muslin squares that were printed with patterns in red ink. The patterns called for simple stitches, so they were easy for everyone to complete and use. Children used these "penny squares" to practice their sewing and embroidery skills, and the completed squares were often made into Redwork bedspreads and linens. Jean explained that she and a friend took their penny squares to work on while their children took swimming lessons. This quilt is the result. 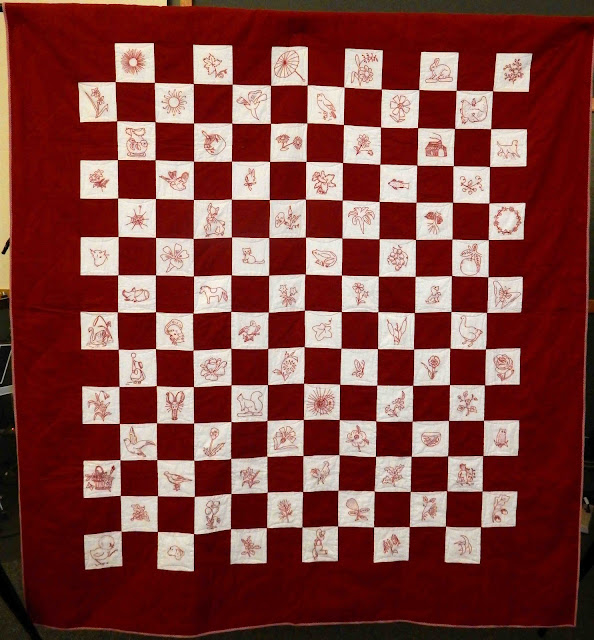 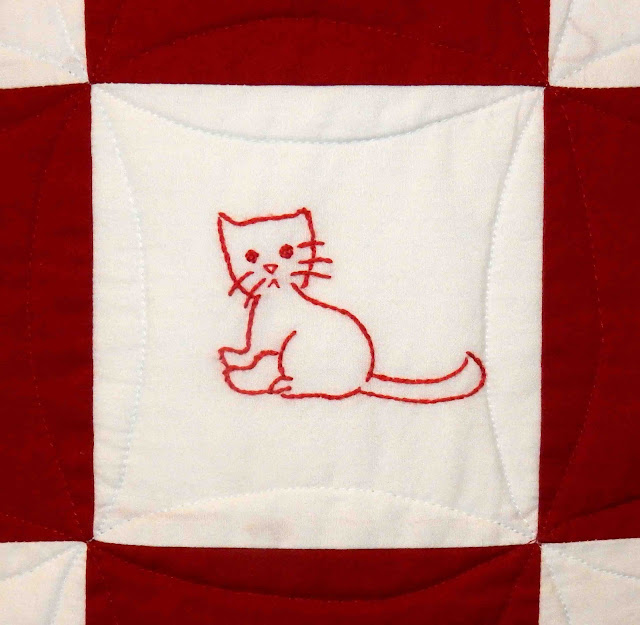 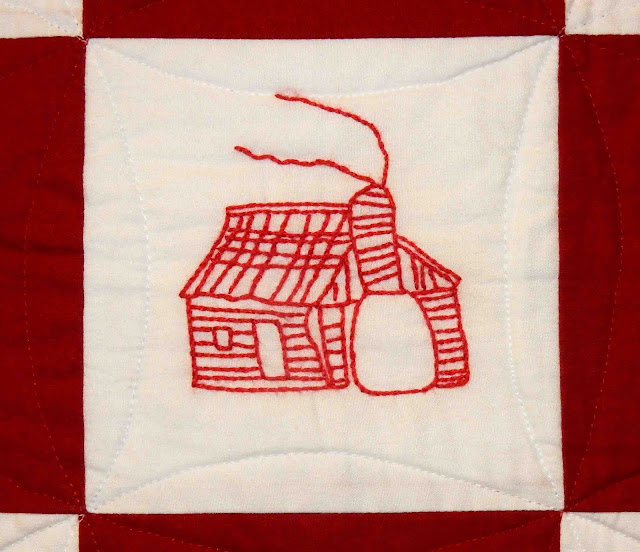 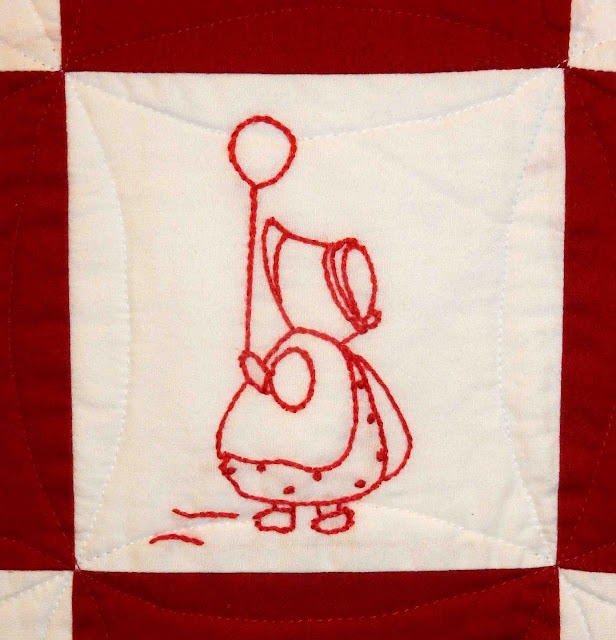 Jean created our guild's raffle quilt back in in 2013. You can read an article from our local newspaper about the quilt right here. Here is a picture of Jean with her quilt. 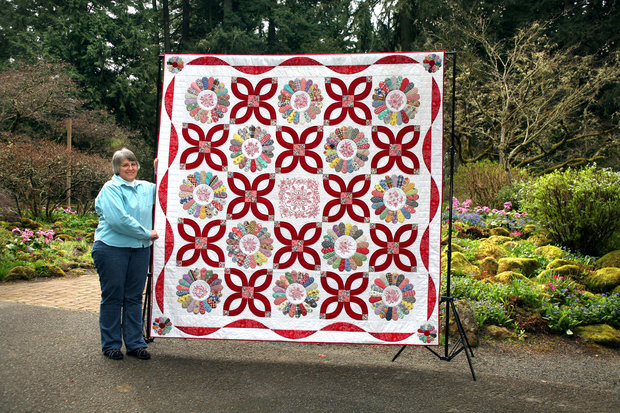 Since that time, she's created a similar quilt, and she notes that this is one of her few quilts without any red. She calls this one Dresden Nights. 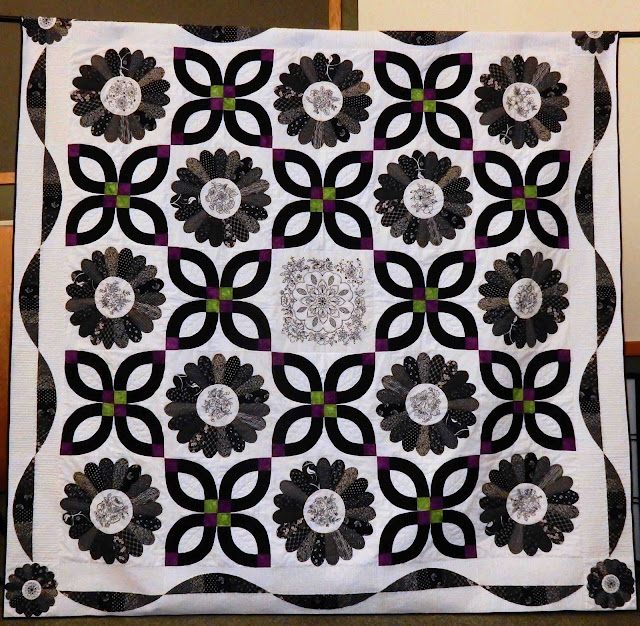 Here's a close-up of some of her beautiful embroidery. 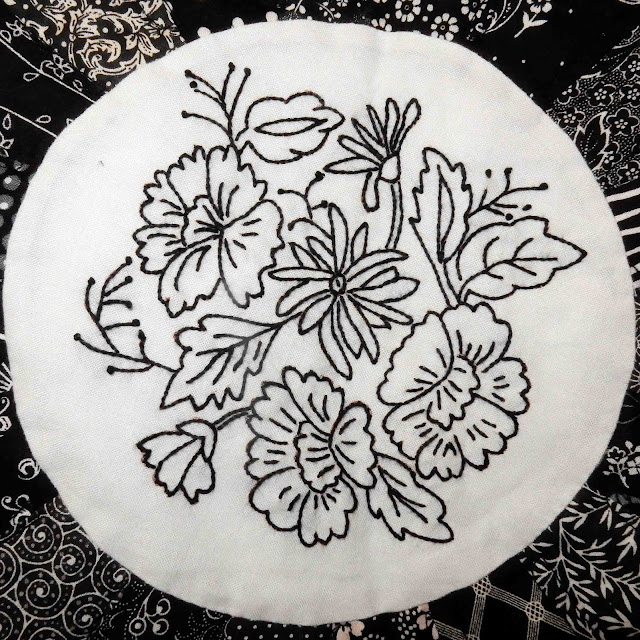 Jean's trunk show was very enjoyable and we certainly learned a lot about redwork that we didn't know before. Thank you, Jean!